QMI Security Solutions, of Itasca, Illinois, was just awarded the Innovation Prize for Rolling Shutters (Rollläden) at the R+T shutter and blind trade show in Stuttgart Germany. The R+T show occurs every three years ( http://www.messe-stuttgart.de/en/r-t/ ) . It is the most significant shutter and blind trade fair on the globe and is attended by 58,000 visitors from 125 different countries. 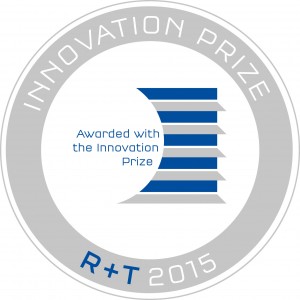 Per the R+T posting, “Since 1991, R+T has been richer by one more attraction and one which provides a decisive impetus to achieve clever innovations: the R+T Innovation Prize. Over the years, it has gradually become a coveted prize for more and more exhibitors and has generated enormous media response. In the anniversary year (50th) of R+T the prize will be awarded for the ninth time.” Nearly 80 written submissions were made in the Roller Shutter/Rollladen category in the three years since the 2012 award. QMI’s new Qompact rolling shutter system was named one of two finalists in August of 2014.

Final presentations were made for all 9 innovation categories to a 19 person jury panel on January 31, 2014 in Stuttgart Germany. The winners of each category were announced during a ceremony on Monday, February 23rd 2015 at the Mövenpick Hotel adjacent to the Messe-Stuttgart trade fair facility. QMI was the only United States’ company to be awarded an Innovation Prize. QMI’s new Qompact shutter was determined to be the most innovative rolling shutter product brought to the global market in the past three years.

The Qompact roll shutter by QMI Security Solutions is the evolution of roller shutter design. The unique, proprietary design features a special slat design that rolls into a tighter coil, reducing the shutter box size by 40-54%. The curtain is divided into groups of different sized slats. As the roll gets larger, the slat size is adjusted so that the hinges sit next to each other (adjoining) instead of on top of each other (stacking)-often referred to as a “nested” design.

Perforated “vision” slat curtains are also available with the Qompact shutter for commercial storefront applications, counter shutter applications for both vision and air flow; and, vision shutters can be also be used residentially where security with vision is desired. Qompact curtains are available in standard, narrow European rails or end retained rails for high winds or added security. End retention adds a security screw to the end of every curtain slat, which is captured into a channel in the side rails. These captured screws prohibit the curtain from being pushed, or pried out of the side rails. In fact, during security testing, a 5’ x 5’ Qompact shutter withstood 7 kicks, 50 punches, and 80 hits from a 12 lb. sledgehammer-and still did not allow access. In contrast, a European style foam-filled slat was destroyed with just 2 kicks.

The Qompact curtain strength is similar to a steel curtain, but without the bulky large box and heavy operation. In strength testing, the Qompact hinge pull-apart strength was 2700 lbs with a 6” section, versus the foam-filled breaking at 100 lbs. Additionally, each of the end retention security screws required 1500 lbs of pull out–and a typical Qompact curtain will have 60+ end retained security screws.

Qompact utilizes a non-slip hinge, when enables the use of a torsion spring inside the tube. The wound spring offsets the weight of the shutter curtain and allows for easier strap and crank operation with larger available sizes, a manual push-up/pull down operation for up to 140 sq ft, and extended motor life as the shutter motor has less weight to lift due to the spring assist.

Upon installing their very first motorized Qompact shutter, QMI’s dealer in Alabama stated, “this is the most quiet and smoothest operating shutter I have ever heard. I’ve been around shutters for 15 years, and this Qompact runs better than anything I have witnessed.” The Qompact slats are designed to have each slat hinge seated next to the adjacent hinge, whereas, a traditional shutter rolls up haphazardly and the hinges bounce off and reset with each other as the shutter coils up.

Unlike a foam-filled slat, a Qompact shutter is 99% recyclable when it does exceed its lifespan. “During manufacturing, 100% of the slat cut offs are recyclable; thus, the Qompact is possibly the most sustainable rolling shutter on the market with almost no material ever going into a landfill,” stated Tom Miller, Qompact Manager at QMI.