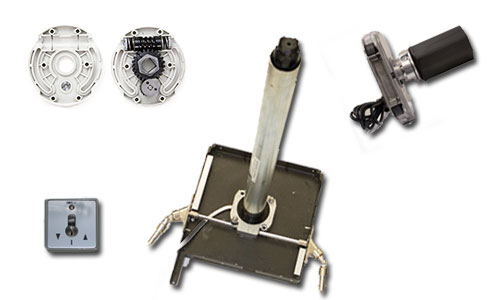 To ensure optimal performance, operate your Roll-a-way rolling shutters as often as possible. Once per week is recommended, but a minimally acceptable standard is once per month. This will shake loose any foreign substance that may accumulate on the slats and side tracks.

DO NOT force your shutters to open or close.

Cleaning With the shutters in the completely open position, use a damp cloth or towel to wipe down the inside of the side tracks and the outside of the box housings.

Spray the inside of the side tracks with SILICONE SPRAY ONLY. DO NOT USE any oil-based lubricant such as WD-40. Then dampen a cloth with the silicone spray and wipe down the outside of the box housings, the exterior of the side tracks, and the entire universal and handle assembly. Perform this procedure once per month if possible or minimally once every three months.

OPTIONAL: Should you wish to wash the shutter slats, place the shutters in the completely closed position and wash slats with a vertical motion using cleaners such as Fantastic, 409 or equivalent. RINSE COMPLETELY.