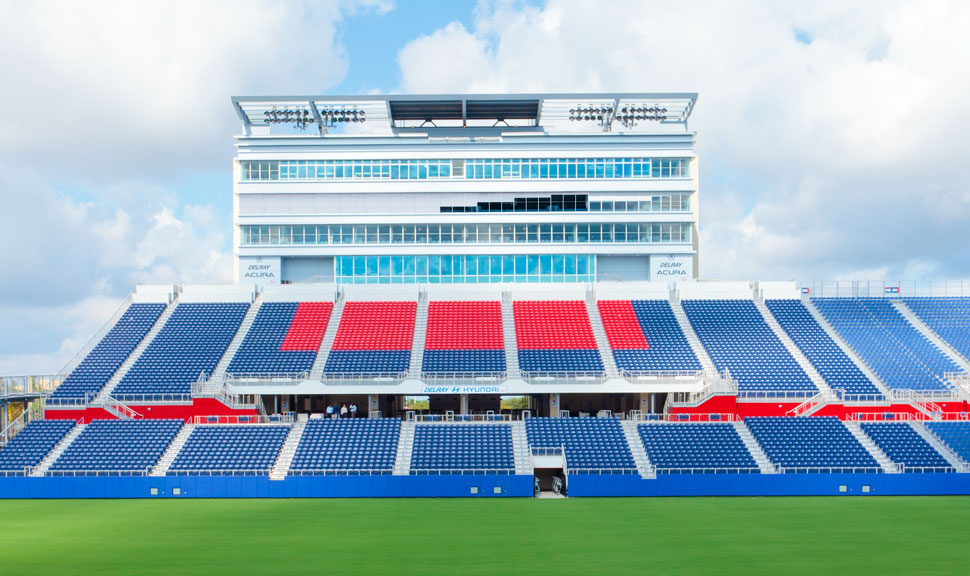 Is that a stadium luxury box window or a hurricane shutter? Actually both!

Florida Atlantic University’s new football stadium in Boca Raton Florida features luxury suites rising above the stadium’s west side seating which will accommodate 22 people each and “will have operable glass windows so guests can experience all the game-day excitement while enjoying a climate-controlled environment,” as stated on the www.FAUsports.com stadium website. A specialty glazing contractor from Texas with an operable glass system was chosen who specializes in stadiums. These operable stadium window systems have been installed throughout the United States. However, the challenge in South Florida is to also protect the structure from hurricanes. Code requirements in South Florida require that the glazing is protected from both small and large wind borne missiles. Florida building code section 1606.1.4 protection of openings ( www.floridabuilding.org ) states:

1. Glazed openings located within 30 feet (9.1 m) of grade shall meet the requirements of
the Large Missile Test.

2. Glazed openings located more than 30 feet (9.1 m) above grade shall meet the
provisions of the Small Missile Test

The luxury suites are located well above 30 feet, thus only the small missile impact protection is required. The purpose of the small missile testing is to simulate the typical problems resulting from hurricanes for high rise buildings. Hurricanes blow roofing gravel off other high rise buildings and the resulting storm of gravel at upper elevations is what causes most of the damage above 30 feet. Below 30 feet, damage from flying tree branches, signage, and other wind borne debris is simulated with the large missile testing using the 9 lb 2×4 lumber shot from a test cannon. Only the small missile requirements were necessary for the FAU stadium suites.

Impact glass is available and designed not to shatter and let wind pressures inside the building, thus preventing roof lift off due to the pressure changes. Impact glass, however, does still break and would require replacement. Also, the glazing contractor’s operable stadium glass windows are only available in ¼” tempered glass and the additional thickness and weight of laminated impact glass would not work with this operable application. The project architects, HKS and Shenkel Schulz chose to incorporate a Florida Building Code (FBC) compliant roll shutter. The specialty glazing contractor contacted several hurricane roll up shutter manufacturers for this project. QMI Security Solutions, manufacturing the Roll-a-way line of hurricane shutters was the only company willing and able to integrate their roller shutters with the glazing contractor’s operable window design.

While QMI’s hurricane rollup shutter system was already FBC approved for both small and large missile protection, it was originally approved with the QMI hurricane side rails as part of the compliant system and the roller shutter curtain alone would not be approved without further testing by the FBC independent test labs. QMI has an in-house licensed engineer to assist with site-specific designs such as the FAU stadium project. For several months, the glazing contractor and QMI worked together to modify the glazer’s aluminum mullion design extrusion to now include special “side rail” channels to the current design to enable rollup shutters to share the same mullions as the operable window glass. The mullions increased in depth as a special channel was added to accommodate the roller shutter. The width of the mullions was unchanged as a wider mullion would restrict the views from the luxury suites. QMI and the glazing contractor then built full-size samples and assembled the revised system at an independent test lab in Florida who certifies small and large missile compliance. The system custom-designed for the FAU stadium project is now the only FBC hurricane-approved operable window system in Florida.

QMI not only assisted with the design of the system, they also installed all the roll shutter components onto the shared mullions after the glazing contractor finished their portion of the on-site installation. The site General Contractor, Belfour Beatty/James A Cummings, provided 18” wide walk-board scaffolding on the entire face of the luxury suite, more than 50’ above the lower level seating area. QMI employee installers installed 33 shutter curtains plus motor-tube assemblies on three levels of the stadium’s west side luxury suites in just five days. The FAU stadium is due to open on schedule for the fall 2011 football season. With the Atlantic hurricane season continuing from June 1st through November 30th, hopefully the QMI rolling shutters won’t be used as much for hurricane protection as they will be for improved energy efficiency, UV fading protection, and light control for the high end luxury suites.