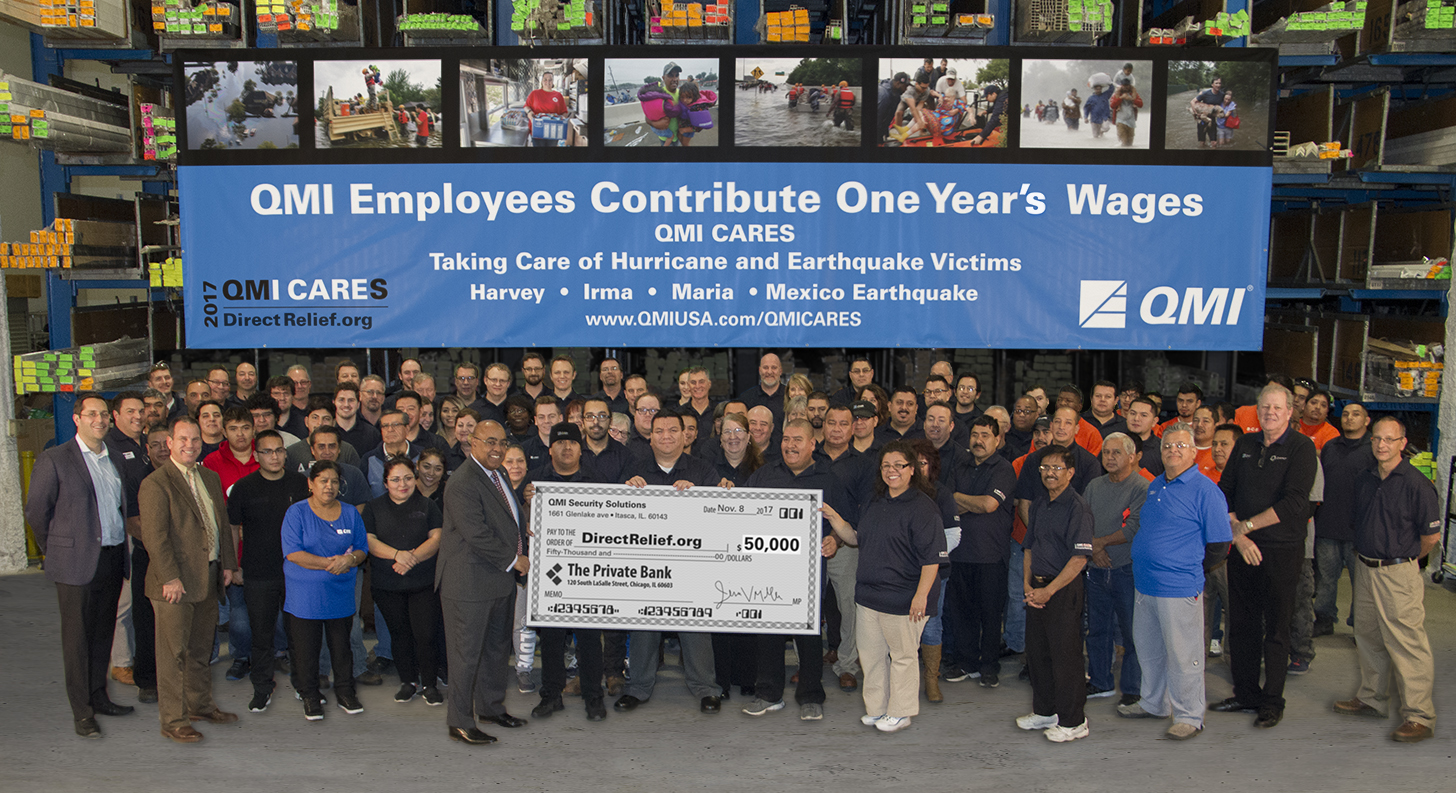 Itasca, Ill. — November 13, 2017: The employees at QMI Security Solutions, Inc. (QMI) did not sit idly by after the devastation of Hurricanes Harvey, Irma, and Maria and the Mexico earthquakes. Many of the company’s customers, family, and friends live in the stricken communities of Texas, Florida, Puerto Rico, and Mexico. The employees came up with a novel plan ─ to each donate the equivalent of at least one day’s wages to help those in need. That contribution in hours was matched by QMI and together they raised $50,000 to donate to Direct Relief, a nonprofit organization that responds to natural disasters and emergency situations by rushing medical aid to communities in need.

“We all know people in the affected areas, and wanted to support those communities,” said Jim Miller, founder and president of QMI, which manufactures physical security and hurricane protection products such as rolling shutters and screens for retail, commercial, and residential customers throughout North America. “It was an opportunity to give back, and we are so proud that our employees took the initiative to do so. No matter their level, each donated at least eight hours of valuable time.”

Every employee participated – from Miller to the workers on the factory floor. In the end, QMI and its 91 employees, along with many of its contract workers, contributed a total of 2,100 hours, the equivalent of a full year’s wages. QMI offered employees five ways to contribute, including donating an hour per week for eight weeks, eight hours over one week, or eight hours of their vacation.

“QMI made it very easy to donate, and the match doubled our effort,” explained Tom Miller, QMI’s Vice President of Marketing. “We are so excited about what we did as a group – we raised more money together than we ever could individually. Just as important, we know our donation will directly help those who need it, as we chose a terrific charity that specifically directs funds to the four relief efforts we want to support.”

QMI’s donation benefited Direct Relief, a humanitarian aid organization active in all 50 states and more than 80 countries, whose mission is to improve the health and lives of people affected by poverty or emergencies.

“We are extremely grateful to QMI and its employees for their generosity in this critical time,” said Thomas Tighe, Direct Relief’s CEO. “Following a succession of hurricanes that devastated communities throughout the Gulf Coast and Caribbean, as well as earthquakes in Mexico that affected thousands, Direct Relief’s primary task is minimizing any further toll on human life and helping communities rebuild. QMI’s donation goes far in helping achieve that end.”

QMI proudly presented a check for $50,000 to Direct Relief Board of Directors member Dr. Byron Scott (shown front row receiving check) in a special ceremony on November 8th at QMI’s headquarters in Itasca, Ill. “Areas hit hard by the recent hurricanes and Mexico earthquake need ongoing medical aid help, especially Puerto Rico because of the extent of the damage to a lot of its infrastructure,” said Dr. Scott.

In support of hurricanes Harvey and Irma, “Direct Relief has shipped more than $35 million in medical aid to over 95 hospitals and healthcare organizations affected by the storms,” Dr. Scott said.